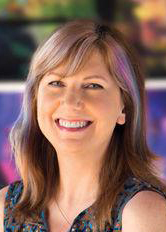 A grand ballroom. A yellow gown. A sweet melody. Waltzing beneath a shining chandelier, a girl and her cursed prince fall in love in a tale as old as time in the iconic ballroom scene from  Walt Disney Animation Studios’ “Beauty and the Beast.”

The scene, a ground-breaking feat of technology and artistry, inspired Michelle Robinson ’91 to pursue a career in digital animation, which led her to work on other hit Walt Disney Animation Studios films like “Tangled,” “Zootopia,” and “Pocahontas.”

Over the last 26 years, Robinson, an outstanding alumna of the College of Architecture, has worked as an animator, lighting designer, and is currently a character look development artist and supervisor at Walt Disney Animation Studios.

Growing up in a military family, Robinson moved a lot as a child and found her way to Texas in high school. In 1991, she graduated from Texas A&M with a Bachelor of Environmental Design degree and a Master of Visualization in 1993 before going to work for Disney Animation.

Robinson recently returned to the visualization department to serve as an industry expert for the College of Architecture’s annual Summer Industry Workshop, which partners with industry behemoths like Walt Disney Animation Studios to train future animators in a real-world work pipeline. Robinson was one of five Disney experts who came to campus to work hands-on with the graduate and undergraduate students creating short, animated films.

While on campus, Robinson talked about her journey from The Viz Lab to Disney Animation.

What inspired you to become an animator?

“While I was doing my undergrad in environmental design, the Visualization Lab was just being built. After it was done, I would watch the students through the window work on their computers, and I was really interested in what they were doing, so I decided to enter the Visualization Master’s program right after graduation.

It was the early days of computer graphics, and I wasn’t even sure how I was going to apply that technology or what I even wanted to do.

Midway through my graduate program, though, ‘Beauty and the Beast’ came out with that really fantastic ballroom sequence, which utilized computer graphics. Before, Disney films were always so magical - doing something like that seemed out of reach. It was seeing those computer graphics for the first time in a Disney animated film that made me believe that animating could be a career for me.

So, after completing my coursework, I sent my demo reel and resume to Disney Animation, and now 26 years later, I’m still here.”

What is character look development?

“Look development is the department that specializes in textures and color for materials on characters, props and sets. Pretty much everything in the film goes through our department to be painted and have material qualities applied to it.

We also do hair and fur grooming, which is essentially building and sculpting the shape of the hair or fur. In my role of character look development supervisor, I mentor a team of artists that do that particular work in a film.”

What is your favorite project that you’ve worked on?

“I really liked Zootopia for a couple of reasons. I liked that we were telling a nuanced story about bias and how sometimes even good people might have biases they may not be aware of and how to challenge those.

The movie also brought with it a whole bunch of interesting challenges because all of the characters were animals, so we got to do deep research about fur and how fur differs from hair, and we built tools to help create believable fur. I think we did over 70 different species of animals, so it was a lot of fun researching those.”

How did your time at Texas A&M help to prepare you for your career?

“The education of the Viz program was spot-on. We had really great instructors and mentors, and the brand new Viz Lab was, and still is, state of the art in terms of equipment and software. Transitioning from here into a job at Disney Animation was great because I was using the same kind of tools and equipment I learned to use here.

One thing, though, that you have now that we didn’t when I was a student is the Summer Industry Workshop, where students really get exposed to working through the entire production pipeline on a short video, and they get to interact with mentors from the industry.”

What are your impressions of the students’ work this summer?

“I’m super impressed. They’re doing great, and I can’t wait to see it all finished. Every time I come here, I see the students’ hard work and am just amazed at how much more they know than I knew when I was a student.

As a person who’s been working for a really long time, coming here and working with the students, getting to experience their enthusiasm and energy, is a really great boost. It really reinvigorates my interest in what I’m doing. And teaching something is a way of relearning it yourself.”

If a student wants to work at Disney when they graduate, what does it take to get there?

“We’re always looking for people who are experts in their craft. We want highly talented and skilled demo reels. We also look folks who are collaborative, communicate well, and work well on a team, which is also something the students are really well-prepared for in the program here.”

Our Commitment to Diversity