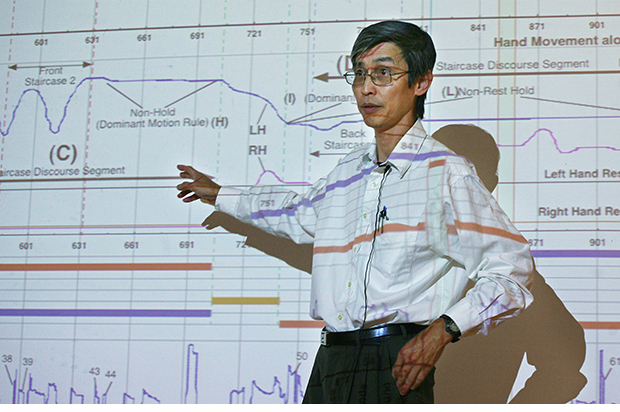 To envision the future of micro-manufacturing — an innovative, potentially revolutionary system for localized, low-cost product production in varying quantities — the National Science Foundation tapped Francis Quek, professor of visualization at Texas A&M, as one of 23 recipients of its first Convergence Awards, which come with $100,000 grants aimed at addressing societal challenges through scientific collaboration.

Quek’s project, “From Making to Micro-Manufacture: Reimagining Work Beyond Mass Production,” will look for ways to access the market that lies between hand-built prototypes and mass-manufactured goods. Micro-manufacturing, he posits, could be the next Industrial Revolution, a natural advancement of how humans and technology produce goods in the future.

The grant, in part, will fund a 2018 workshop in which academic and industry experts in supply chains, cyber-manufacturing, design, technology, education, and engineering flesh out the scale, infrastructure and culture needed for ubiquitous micro-manufacturing.

“The NSF has supported cross-disciplinary collaboration for decades,” said France Córdova NSF director. “Convergence is a deeper, more intentional approach to the integration of knowledge, techniques, and expertise from multiple disciplines in order to address the most compelling scientific and societal challenges.”

Among those challenges are the shrinking U.S. labor force and the limitations of the mass-manufacturing process.

“In America, we have been riding the wave of mass production for 60 years,” Quek said. “Mass manufacturing requires that you keep making more at lower cost. But the industry is getting to the point where it’s getting rid of the workers.”

U.S. labor participation is at its lowest since the 1960s, according to the U.S. Bureau of Labor Statistics. Automation has led to a rise of manufacturing output and a fall in employment. American laborers are also unable to compete with low-wage foreign workers.

Micro-manufacturing could solve this problem by providing local, well-paid jobs for skilled laborers. It would also provide a way for entrepreneurs and inventors to manufacture goods for a small audience. Currently, only items with high market demand are produced at an affordable price, so niche products with less demand become very expensive.

“Countless useful innovations do not make it to market because the need for the product is judged unviable for mass production. With micro-manufacturing, inventors with small market viability could profit,” said Quek. “The challenge is to figure out how to produce smaller quantities at a smaller cost.”

Emerging technologies, such as 3-D printers and robotics could be employed at local production hubs to fabricate products in any quantity needed.

Quek compared the potential effect of micro-manufacturing to the transformational impact of low-cost paper printers and computers.

“Before that development, printing required etching printing plates and minimum print runs. It is an expensive manufacturing operation,” he said. “Individualized desktop publishing was expected to become the new norm, but instead, Kinko’s and similar businesses emerged,  providing jobs and freeing creators from the mechanics of production… all while keeping it low-cost.”

The Kinko’s model is too simplistic for this new idea, said Quek, because one shop couldn’t have enough types of machines to produce everything; however, a diverse network of micro-manufacturers could emerge to fill the void.

“One shop might offer 3-D printed ceramics, another metal. There could be clusters of suppliers doing different things,” he said.

This idea could appeal to big business and government as well.

“Right now, if the government has to retrofit 1,000 jets, they end up having to hand-make each part at a large cost because that is not enough to mass produce,” he said. “However, people are already 3-D printing custom prosthetics and joints. It’s a small market, but eventually airplane parts, medical devices and motorcycle controls, anything specialized, could be 3-D printed in the hundreds or thousands to fill needs at a much lower cost.”

A book detailing the findings of the workshop will be forthcoming.