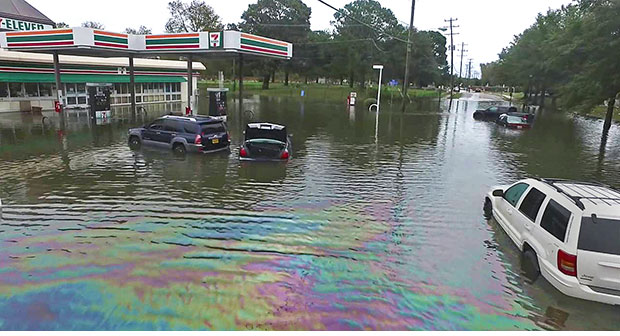 Flooding in Norfolk, Va., caused by Hurricane Matthew in 2016. The city’s planners have adopted a scorecard developed in part by Texas A&M researchers to evaluate the city’s hazard plans.

City planning staff in Norfolk, Va., a coastal city of 243,000, have identified weaknesses and inconsistencies in their community’s natural hazard plans with a scorecard developed in part by researchers in the Texas A&M Department of Landscape Architecture and Urban Planning.

Norfolk, menaced by hurricanes, tropical storms and high-tide flooding, includes the world’s largest naval base and the Port of Virginia, which includes the sixth-largest containerized cargo complex in the U.S.

“The city’s staff had not previously evaluated their hazard mitigation plan,” said Jaimie Masterson, program manager at [Texas Target Communities] (http://ttc.arch.tamu.edu) , who [blogged] (http://coastalresilienceblog.web.unc.edu/2017/08/city-of-norfolk-adopts-resilience-scorecard/) about the scorecard’s use by Norfolk planners on the University of North Carolina Coastal Resilience Center website.

Masterson is part of a research team led by Phil Berke, professor of landscape architecture and urban planning, who led the scorecard’s development in a project funded by the U.S. Department of Homeland Security.

The scorecard’s use, she said, also generates conversations between planners and policymakers that ultimately improve Norfolk’s natural hazard resilience.

“Cities are able to have better conversations, which lead to better planning decisions and public investments,” said Masterson.