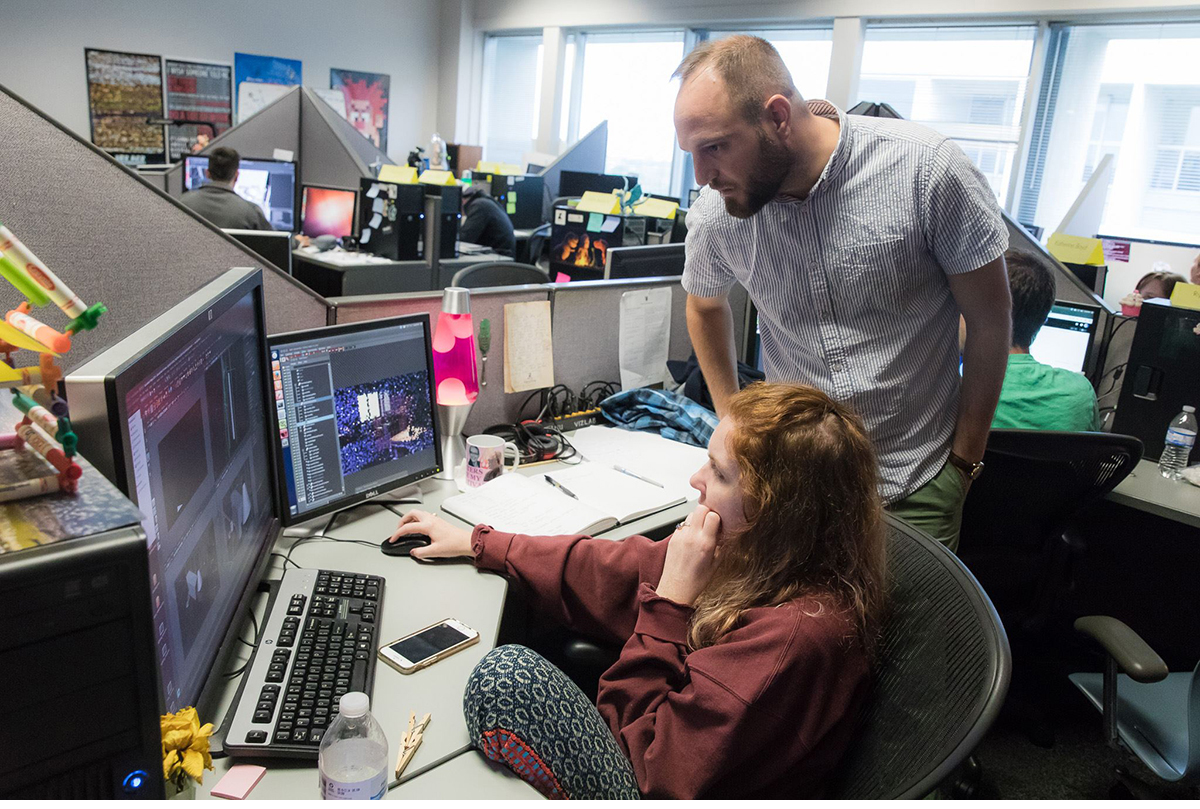 Jon Kiker works with a Vizzer on lighting for her short film.

Lighting is a secret weapon in animated movies — it’s used in every frame, yet when done well, viewers will never notice it. Pixar artist and Texas A&M former visualization student Jon Kiker has used his technical talents to create lighting for the upcoming “Toy Story 4,” “Coco,“ “Inside Out,” and other beloved Pixar tales.

A lighting technical director at Disney Pixar Animation Studios, Kiker recently returned to his alma mater to serve as an industry expert for the Department of Visualization Summer Industry Workshop, where he and a team of Pixar artists helped students as they crafted animated shorts from scratch using a real-world production pipeline.

He spoke about his work and path to Pixar after earning a Master of Visualization degree in 2008 and a Bachelor of Environmental Design degree in 2005.

What does a lighting designer do?

“It’s a lot like stage lighting where you have characters and sets and the lighter’s goal is to focus the viewer’s attention on where they’re supposed to look as well as set the mood and time of day for a scene. What most people don’t realize is there aren’t just one or two lights in a scene – there can be thousands and they’re all artistically placed to achieve the look we’re going for and direct the viewer’s eyes where we want them.

What was your favorite project to work on at Pixar and why?

“I really enjoyed working on “The Good Dinosaur,” which was the first time I did master lighting ­–lighting a set during an overall sequence. I did both master and shot lighting, so I had to make an overall lighting theme work and fine tune it to each individual shot. I learned a whole lot. I also enjoyed working on “Coco.” I did a compositing project for the balls of fog in the ‘Land of the Dead’ where I added fog, flares, and layered the image together. It was fun to figure out.”

How did your time at The Viz Lab help prepare you for your current career?

“Collaborating with other students who weren’t doing lighting was beneficial because we work in a close-knit community and you have to solve problems together. In my undergraduate beginner architecture classes, I learned fast to not be too precious with my work. A professor would look at something I worked so hard on and tell me to throw out all but a small part of it. It was crushing, but in the industry, you have to listen to a critique and apply it.”

What are your impressions of the students’ work this summer?

“They're doing some great work. I'm seeing some really good lighting from each group and they've been really receptive to the critiques. One project, ‘ [Fruit Danube] (https://www.youtube.com/watch?v=t_wpz8ywSDI) ,’ has used lighting really well. They used different lighting themes to separate the mundane part of his life from the more fun adventurous part and it reinforces the story.”

If a student wants to work at Pixar when they graduate, what does it take to get there?

“It takes a willingness to learn and a focus on getting good at your particular craft. It helps to focus on one aspect of the animation pipeline and become as much of an expert on that as you can.”