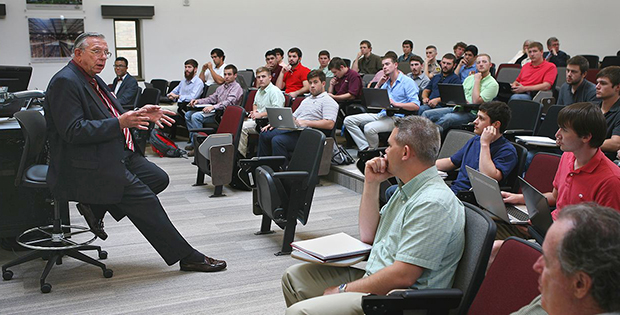 Honor Bob Segner, sponsor one of the remaining 64 seats in his namesake auditorium.

There are 64 seats in Francis Hall’s Bob Segner auditorium that need a sponsor. The sponsorships are part of a Department of Construction Science fund raising [initiative] (https://securelb.imodules.com/s/1436/gid3give/2014/index.aspx?sid=1436&gid=3&pgid=1253&cid=2741&dids=407) honoring the auditorium’s namesake and beloved professor, Bob Segner, who is [retiring] (http://one.arch.tamu.edu/news/2015/10/5/segner-retiring/) at the end of the Spring 2016 semester.

The remaining seats in the auditorium, centerpiece of the recently [renovated] (http://one.arch.tamu.edu/news/2015/3/26/cosci-occupies-francis-hall/) Francis Hall, home of construction science education at Texas A&M, can be sponsored with a $5,000 gift per chair prior to Segner’s final lecture on April 7, 2016.

Sponsors’ names are inscribed on a nameplate on each chair and on a plaque in the auditorium listing all of the donors. Seat sponsors are also recognized as Gold Donors to the Francis Hall Capital Campaign on the department’s Donor Hall of Fame Wall.

More than 52 former students have already sponsored a seat in Segner’s honor. Seat sponsors new and old will be invited to hear Segner’s April 7 final lecture — one of a series of Spring 2016 events honoring the teaching veteran’s 45-year career.

“Bob Segner has won every major teaching award offered at the department, college and university level, winning many of the awards numerous times,” said Joe Horlen, head of the department. “His teaching has also been recognized by many professional building organizations.”

“He was instrumental,” he continued, “in the success of this department and the success of many former students in construction industry throughout Texas, the nation and the world.”