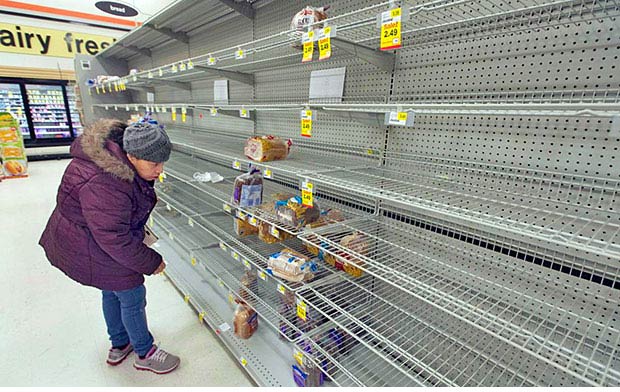 HRRC researchers are part of a four-university National Science Foundation-funded project to identify critical links of the U.S. food distribution system most likely to be disrupted by a natural disaster.

Texas A&M University researchers are collaborating with three other universities on a [National Science Foundation] (https://www.nsf.gov) initiative aimed at identifying links between the U.S. food distribution system and the nation’s energy, water and transportation networks that are most likely to be disrupted in a natural disaster.

“Food access and affordability are persistent problems for more than 14% of Americans in normal times, but these problems are greatly exacerbated following disasters,” said Walter Gillis Peacock, director of the [Hazard Reduction and Recovery Center] (http://hrrc.arch.tamu.edu) at Texas A&M’s College of Architecture, who is leading the four-year, $2.5 million research collaboration that includes researchers from the HRRC and Texas A&M’s Department of Geography.

“The food distribution system is a complex web of networks that must function together in a stable manner for a community’s residents to have food available after a disaster,” said Peacock.

“Human and economic losses and social disruption caused by disaster-related failure of these networks are disproportionately high, relative to the actual physical damage they sustain,” continued Peacock. “The potential exists for even larger losses in the future, since population and economic development in hazard-prone coastal areas of the United States is increasing dramatically while investments in disaster-resilient infrastructure systems are lagging,” said Peacock.

In addition, he said, climate change-associated sea level rise, which increases the likelihood and magnitude of natural disasters around the world, creates new risks for coastal communities, where a large proportion of the world’s population resides.

To discover the most significant demands natural disasters place on food distribution networks, the capacity of each network to respond, and the interactions between networks and social systems, project researchers are developing virtual network models integrated with socio-economic, employment and business records associated with Gulf and Atlantic hurricane strikes between 2005 – 14.

These analyses, according to the project description, should:

The research team believes the study will encourage the adoption of policies aimed at maximizing post-disaster food availability by balancing disaster-related vulnerability and resilience. The effort, they said, should also identify new planning and training options for a range of disaster scenarios and foster a shared language between disciplines regarding the causes and characterizations of hazards and risks.

“A multidisciplinary approach is necessary because of the complexity of the project,” said Peacock. “Indeed, for addressing many of the challenges facing our nation and the world today with respect to sustainability, resiliency, and environmental hazards, we must develop interdisciplinary perspectives, which demands interdisciplinary teams of scientists and engineers.”

For instance, HRRC researchers understand food distribution networks and household characteristics, engineers are needed to understand and model the physical components and interdependencies of transportation, energy and water systems, and computer and computational scientists are needed to develop comprehensive models that represent communities and their infrastructure, predict future impacts and provide the basis for assessing policy and organizational interventions that lead to greater food supply resilience.

The collaboration is part of the NSF’s [Critical Resilient Interdependent Infrastructure Systems and Processes] (https://nsf.gov/news/news_summ.jsp?cntn_id=189956&org=NSF&from=news) (CRISP) program that aims to increase the resilience, performance and readiness of the nation’s interdependent critical infrastructure systems.

Join us at the Nov. 3 Aggie TSA Reception in San Antonio, TX