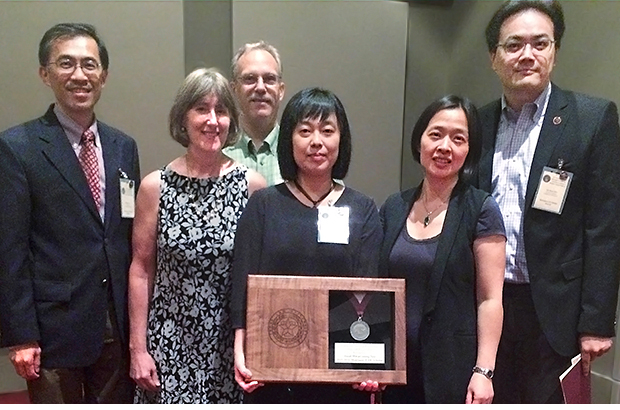 For deftly guiding student development of intuitive computer interfaces to facilitate human-computer interaction, and for leading classes in the production of exhibit-worthy art, Jinsil Hwaryoung Seo, an assistant professor of visualization at Texas A&M University, was recognized as a 2015 Montague- [Center for Teaching Excellence] (http://cte.tamu.edu/) Scholar.

Seo was one of nine Texas A&M faculty members who received the honor at the Montague program’s 25th anniversary celebration Oct. 7, 2015 in the Bethancourt Ballroom of the campus’ Memorial Student Center.

Each academic college selects a tenure-track faculty member who has excelled in teaching undergraduate students to receive the prestigious award, named in honor of the late Kenneth Montague ‘37, a distinguished alumnus who was a long-serving trustee for the Texas A&M Foundation.

Awardees each received $6,500 to encourage further development of their teaching abilities.

As head of the Soft Interaction Group in the Department of Visualization, Seo leads undergraduate and graduate students who develop soft toys and interactive installations employing alternative interfaces that encourage users to more naturally and intuitively engage and and evoke programmed reactions.

One of the group’s creations, “Touchology,” is a series of real and artificial plants that, when touched, produce sounds of running water or bird songs from electronic components in their bases. Another installation in the series is a set of grasslike fiber optic strands that respond to touch by displaying lighting patterns on the tips of the fibers.

“We took the plants to a local nursing home, and the residents just loved them,” Seo said. “The nursing home activity director said residents were smiling the entire time they interacted with the plants, and that they had never reacted so positively to something brought to the facility.”

During the fall 2013 semester, Seo’s students created interactive sound and projection installations and kinetic sculptures that were exhibited at the Art Center of Brazos Valley. Their technology-based work engaged history, theory and practice in the visual arts.