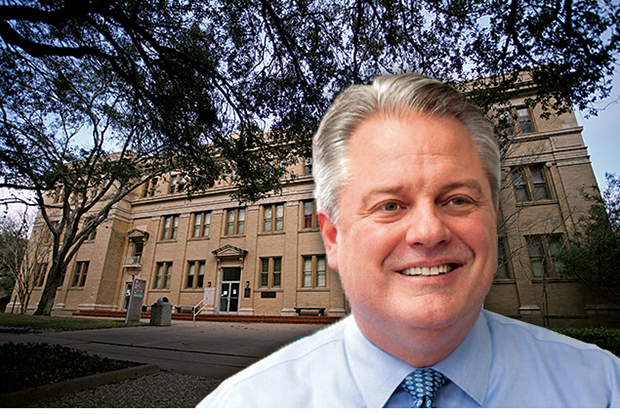 Balfour Beatty Construction and Robert Van Cleave ’81, the company’s chairman and CEO, have combined to make a $150,000 donation to fund a classroom in Francis Hall, the future home of the Department of Construction Science.

When Texas A&M construction science students move into their new Francis Hall headquarters next year, they're lessons will be enhanced by a new state-of-the-art audiovisual classroom made possible by a  $150,000 combined gift from [Balfour Beatty Construction] (http://balfourbeattyus.com/) and Robert Van Cleave ‘81, the company’s chairman and CEO.

“As the construction education program grows to 800 students within the next five years, the Balfour Beatty Construction/Robert Van Cleave Classroom fills a critical need,” said Joe Horlen, head of the [Department of Construction Science] (http://cosc.arch.tamu.edu/) . “The need for classroom space will continue to increase as the number and size of lecture-based construction classes grows to meet the demand for construction science graduates.”

The gift is a welcomed contribution to the campaign aimed at raising funds for the $8 million [renovation] (http://one.arch.tamu.edu/news/2012/2/13/francishall-campaign/) of historic Francis Hall, which will become the Department of Construction Science's new home in fall 2014.

“As a company, and for me personally, it is extremely rewarding to be part of the advancement of construction science at Texas A&M,” said Van Cleave, an [outstanding alumnus] (http://www.arch.tamu.edu/community/formerstudents/outstanding-alumni/past-honorees/89/) of Texas A&M’s College of Architecture who earned a Bachelor of Building Construction degree.

“We are excited about investing in the department’s new home, the future leaders of the construction industry, and in such an exceptional education program, said Van Cleave. “The leaders who learn here today will be responsible for the infrastructure that we enjoy tomorrow.”

Van Cleave joined the company, then known as Centex Construction, in 1996 as president and CEO of its southwest division.

An industry leader for more than 80 years, Balfour Beatty Construction provides general contracting, at-risk construction management and design-build services for a wide variety of markets, serving clients in both the public and private sector. With more than 2,400 employees across the United States, the company is on the Engineering News-Record ‘s list of top 10 ‘green’ builders and has been on Fortune magazine’s annual list of the 100 best companies to work for since 2009.

The company is part of London-based [Balfour Beatty plc] (http://www.balfourbeatty.com/) , a global infrastructure services business operating in more than 80 countries, with a worldwide commitment to providing assets that help societies function, develop and thrive.

Balfour Beatty is one of the largest companies in the Department of Construction Science’s Construction Industry Advisory Council, which supports and promotes the department and its students. The company is a major employer of Texas A&M construction science graduates and a provider of student internships, including internships integrated with the department’s United Kingdom study abroad program.