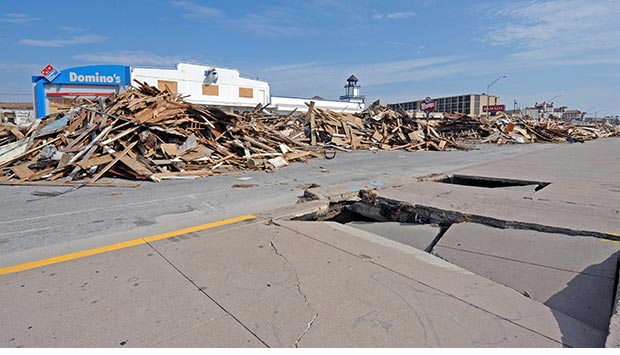 A wall of debris stretched along the Galveston seafront in the aftermath of 2008's Hurricane Ike. Shannon Van Zandt and fellow researchers found that identifying socially vulnerable areas could lead to loss mitigation and increased community resilience after disasters.

Sponsored by the Federal Reserve System, the conference, "Resilience and Rebuilding for Low-Income Communities ,” attracted individuals interested in how research can inform low-income community development policy and practice, including representatives from government and nonprofit organizations, financial institutions, think tanks and consulting firms.

Referencing several studies she helped conduct in Galveston, Texas in the wake of 2008's Hurricane Ike, Van Zandt showed that disparities existed for economically disadvantaged populations at every stage of disaster response and recovery. As opposed to middle- and high-income residents, she said, evacuation of the island's lower-income population was delayed, they had less access to private and public recovery resources, their property sustained a greater degree of damage from the storm and was either less likely to be repaired or was repaired at a slower rate.

“Lower-income populations often live in low-lying areas and in lower-quality homes,” said Van Zandt, which exposes them to greater risk during a disaster. "Vulnerable populations are less likely to have access to information and resources enabling them to anticipate and respond to threats, yet they are more often than not the groups who most need to heed warnings to evacuate or seek shelter.”

Social vulnerability mapping, she said, would reveal disparities that make a difference when it comes to the capacity of residents to respond, mobilize resources and bounce back from natural or other types of disasters.

The research presented at the conference was co-authored by Van Zandt, Walter Gillis Peacock, director of Texas A&M’s Hazard Reduction and Recovery Center, Himanshu Grover, assistant professor of urban and regional planning at the University of Buffalo and Wesley Highfield, assistant professor of marine sciences at Texas A&M University. Their findings were published in the January 2012 issue of Housing Policy Debate.