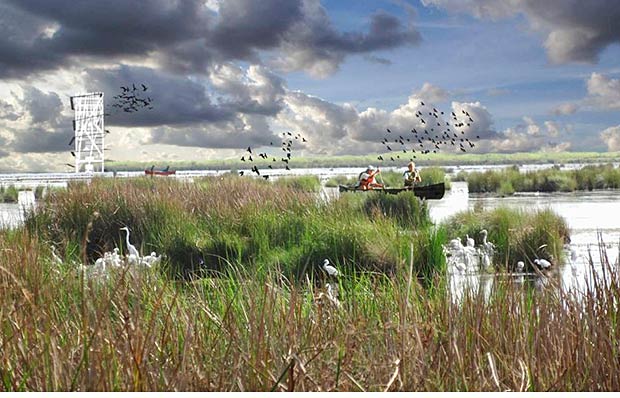 [Tom Colbert] (http://www.legacy.com/obituaries/houstonchronicle/obituary.aspx?pid=175564039) , a former professor of architecture at Texas A&M and an award-winning researcher who fought to preserve Texas’ coastline, died August 24, 2015 after a battle with stomach cancer.

Colbert, who was 61, was an associate professor at the University of Houston. He joined the UH faculty in 1985 after five years at Texas A&M, where he taught architecture and urban design.

He was a vocal advocate for the protection of Texas’ coast, championing hurricane protection systems that would make the coastal area more beautiful and attract outdoor enthusiasts and tourists.

Colbert envisioned a system of floodgates, levees and buffer zones for the Houston Ship Channel that would, as part of a proposed [Lone Star National Recreation Area] (http://www.npca.org/about-us/regional-offices/texas/lone-star/) , serve as a coastal parkland as well as protection from hurricanes.

Inspired by his ideas, his students proposed innovative coastal protection systems. One concept included an observation tower, visible for miles, where tourists could watch ships and birds.

Colbert’s teaching honors included an [Educator of the Year] (http://www.uh.edu/news-events/stories/2014/November/1107Colbert.php) honor in 2014 from the American Institute of Architects’ Houston chapter.

His research, which earned numerous awards and professional distinctions, focused on the development of architectural, urban design, and land use planning responses to the threats of hurricanes and other extreme weather events.

Colbert also created numerous ink drawings during his lifetime, a dozen of which were [exhibited] (https://aiahouston.org/v/event-detail/Drawings-by-Thomas-Colbert/nf/) at Architecture Center Houston this summer.