Learn more about [350.org] (http://350.org/) , McKibben’s organization to wean the world from dependence on fossil fuels.

[Bill McKibben] (http://www.billmckibben.com/) , who the Boston Globe called one of the United States’ most important environmentalists, visited Texas A&M to talk about the threat of global warming and the international movement to end humanity’s reliance on fossil fuels. 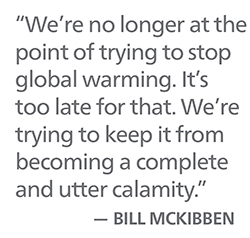 “We’re no longer at the point of trying to stop global warming. It’s too late for that,” said McKibben. “We’re trying to keep it from becoming a complete and utter calamity.”

McKibben’s April 10 lecture at Rudder Auditorium focused on the science behind global warming, people’s growing understanding of the threat it poses, and the political drive for reforms he has stoked as the founder of [350.org] (http://350.org/) — a grassroots movement aimed at raising awareness about climate change, confronting climate change denial, and promoting the reduction of carbon dioxide emissions.

The April 10 lecture is part of the Department of Chemistry’s First Year Program Lecture Series.

In his second lecture , presented April 11 at the College of Architecture's Preston Geren Auditorium, McKibben shared his vision of a world powered by renewable energy and showed photos of people clamoring for change in demonstrations around the world.

The April 11 lecture is part of the Dr. F.E. Giesecke 1886 Lecture Series, which honors the founder of Texas A&M’s architecture program.

Both lectures are made possible by generous donations from the colleges of Science, Architecture, Agriculture and Life Sciences, Veterinary Medicine and Biomedical Sciences, Engineering, Geosciences and Education and Human Development, the Department of Chemistry and the Cengage Learning, Inc.

McKibben's seminal books include “The End of Nature,” widely seen as the first book on climate change for a general audience, and “Deep Economy,” a bold challenge to move beyond "growth" as the paramount economic ideal, and to pursue prosperity in a more local direction — an idea that is the cornerstone of much sustainability discourse today.

In total, McKibben has penned ten books. A former New Yorker staff writer and Guggenheim Fellow, he writes for various magazines, including Rolling Stone, The Atlantic, National Geographic and The New York Review of Books.

In 2007, McKibben founded [stepitup07.org] (http://stepitup07.org/_) to demand that Congress curb carbon emissions that would cut global warming pollution 80 percent by 2050. On April 14, 2007, as part of the effort, he helped lead over a thousand demonstrations, across all 50 states, a watershed moment described as the largest day of protest against climate change in the nation's history.

McKibben founded [350.org] (http://350.org/) , the first planet-wide, grassroots climate change movement. The organization takes its name from the research of Goddard Institute for Space Studies scientist James E. Hansen, who posited in a 2007 paper that 350 parts-per-million of CO 2 in the atmosphere is a safe upper limit to avoid a climate tipping point.

"If humanity wishes to preserve a planet similar to that on which civilization developed and to which life on Earth is adapted,” Hansen wrote, “paleoclimate evidence and ongoing climate change suggest that CO2 will need to be reduced from its current 385 ppm to at most 350 ppm, but likely less than that."

McKibben is the Schumann Distinguished Scholar in Environmental Studies at Middlebury College, a fellow of the American Academy of Arts and Sciences and he holds honorary degrees from 18 colleges and universities.